Well damn, I only just realised that I've not blogged since 2016. Sorry, I've lost all sense of time. This year has simultaneously dragged and flown, and now it's somehow September next week.

And whilst I am not in the blogging mood, it seemed odd to just have a post about a 1990s Paul Lamond game as my final utterance, so here's a blog about the cursed year that has been 20bloody17 that will explain where I disappeared off to

It started well. There was an art trail on in London around the time of my birthday. Nothing usually happens in January so I took some time off work and yomped around London. It wasn't a tour of your usual galleries. These ones were all tucked away in nooks, crannies, behind locked gates and hidden doors. All of them needed to buzz you in. And because the art trail was so poorly advertised and the galleries so niche, I had everything to myself. I love nothing more than heading off on my own into the big city and getting lost, so this was an ace - and freebie - birthday treat to myself. Good start I thought...

Then the arse fell out of the year a bit.

February through April I had three consecutive bouts of the same flu. Alarming fun fact for you. You are not immune from your own germs and illnesses. You can just keep on reinfecting yourself. Ad infinitum. Which is, according to the doctor, exactly what I was doing. I have never been laid up for so long. And there was a moment in April when I genuinely wondered if I would ever get well again.

In March, a close family friend got diagnosed with terminal cancer. We were lucky in that she had enough time to say her goodbyes and sort out all of her wishes. Including being buried with a fully charged mobile phone, a torch, and the book she hadn't finished reading. She wrote her own eulogy and created a four tab post mortem spreadsheet of tasks for the family to make sure everything got done. She was given weeks. She managed six months. She sorted everything. Champ.

Backing up a bit. In the middle of my perma flu, my simpleton neighbour (Mrs Sorry, Not Sorry) brought in some cowboy builders to fit new gutters. As we are a terraced block with continuous guttering I was concerned. As I drove away for the weekend I looked at them, walking across my flat roof with no planks down, and said to James "I will be very surprised if they don't cause some damage" My hunch was right. I got home to find all of their detritus left scattered over my front and back garden, and the next time it rained, sure enough, there was water pouring down the front and back of our house. They had fitted different sized and shaped piping and not connected it fully. I asked her to call them back to fix it (not that they would be any great shakes but I was strapped for cash and this was not my mess) however, even though she is allegedly a fully grown woman, she didn't even know what the company were called, and seemed to think saying her brother in law had booked them would suffice to get us off her case. As she never got around to phoning him, as promised, and left us hanging for ages during a very rainy few weeks we had to give in. All of the damage was being done to our property, it didn't affect madam at all, so we had no choice but to get someone out ourselves and pay for replacements. So that was a couple of hundred quid I didn't need to spend out and some stress I didn't have any physical or mental tolerance for.

Then the garage roof started sagging, after years of the neighbourhood kids running along it - even after they and their parents were asked not to, by residents and by the local police, yep, people round here suck so hard* - so that was another couple of hundred.

*They have stopped now though, after one of them slipped whilst climbing the tree to get to the garage and got their leg stuck in some branches. This was after the police warning. I was washing up and saw it happen. I made the call not to go out and help the stuck kid. One of their friends had already run off to fetch the parents. And the stuck one wasn't going anywhere. I figured it would feel like a lifetime for the stuck kid and a lifetime for the parent rushing over to see what had happened as a result of their refusal to listen to anyone. It worked. They both learned the hard way. I did me some indirect parenting/parent classes that day.

My garage door flew off its tracks landing on top of my newly fixed car, turning inside out in the process and trapping my car in the garage for the whole bank holiday weekend. Mo money, mo money

My glass back door got hit by a stone and shattered. And yet mo money

And Brexit was making my job ten times harder all the while.

I also have ongoing health problems which make everyday life quite the mini ordeal.

So yeah, under the weight of all this, I started to think I had touched a cursed object, disturbed a tomb, displeased a deity.

Then when I finally got rid of the forever flu, had said my goodbyes to our family friend, and all of those pesky housey things were fixed, I was finally somewhat content, and felt like I could pick up where I left off way back in January (despite being now fully skint and on egg and chips for the duration)

But it was not to be.

Yes, the end of April was meant to be the return to the good start I had made in January. But it was about to be the worst part of the year yet. 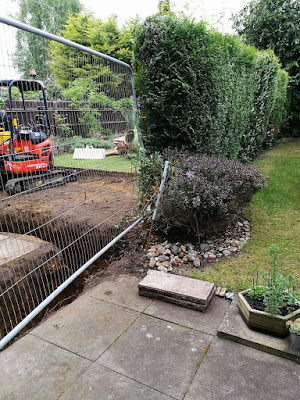 I was a bit taken aback, particularly because neighbour lady (oh yes, the very same one who broke my gutters only months earlier) had knocked at the end of April and gabbled something along the lines of "we're starting building next week, we'll be taking up your fence but we will put it back, or you can just have the wall we are building if you prefer, it'll be really quick" and then she scuttled off

Not quite what was billed. Lied about the fence (it was binned) lied by omission about the garden (I think the excavation of it and removal of my plants warranted a mention), and as for it being quick...

...Well its still dragging on. Here's what I sent to the council last night:

"[redacted twats] have been extending their home since May.

During the course of this build we have put up with a lot. But I am finally complaining.

For context, here is what we have put up with before contacting you:

On day one they removed the fence and dug up half of our garden without permission, they said the fence would go back, they lied and disposed of it This left us with a missing fence and flowerbed. It also left us without privacy, security or a boundary for two months

There has been loud music from the builders and decorators

Rubbish blowing out of the overfull skip onto my garden

Vans all over the street, in front of garages and up on pavements

But lately, and here comes my complaint, well, you know that guideline where you are meant to end building at 6pm?

They have taken to *starting* at that time

Tonight I am having my dinner and attempting to watch TV to the sound of a drill and a hammer. This is not on

I have been working all day, I deserve some peace and down time

The people who own this property are not currently living in it, hence the lack of regard

Most people have to stay in their home whilst it is extended as they don't have a spare, and they therefore make the build liveable (smaller scale, shorter hours) This lot have another, so they have gone off to live the quiet life

Because the only people who will be disrupted are us, they don't care and send their people round into the night. The other night someone was drilling until 9pm

I have had a horrible stressful year because of them. This has been the backdrop to a close family friend dying of a brain tumour. The noise has me on edge as I can't be sure at any time day or night that I will ever get peace

They have no regard for us, so if there is anything you can do, please

The person in charge is the person who put in the planning permission application, [redacted twat] of [redacted twat company]. A property developer. Surprise surprise. Hence so mercenary.

If we say anything when they do turn up, we get a load of smoke blown and platitudes but nothing changes. Thanks"

I got instant replies from my councilors who say warning letters are being sent. They won't have any impact but you can't put a price on catharsis.

So I hope all of this explains my absence.

Although having said that, I am not great at blogging anymore even without a string of calamities to keep me away. I am so used to tweeting that sitting down to write a full blog feels like composing a masterpiece novel. I might call this my last one, and round off nicely with me riding off into the sunset.

We have sold up and are moving to the seaside. Turns out a poky mid terrace in the London environs can buy you a detached house in the back of beyond.

No more shared walls, no more worrying about your house not being the same as when you left it, a hundred miles between me and Mrs Inconsiderate Disingenuous Apologies and a much needed job change

Chin up chuck;sending you best wishes for every happiness in your new home!

All the best in your new home, Christina. Thanks for all the laughs...

In the past I've done stuff for the BBC, Viz, New Humanist, (newhumanist.org.uk/1413) and the Guardian (guardian.co.uk/profile/christina-martin)

I work to promote disability rights. This is a link to my MENCAP blog: www.mencap.org.uk/community/family-blogs/christinas-blog

And this is a charity I support which gives my disabled brother a fantastic, opportunity filled life: www.c-o-t.org.uk They run a farm, give them a visit

I have a handful of Tumblrs: