The Wit & Wisdom of Paul Daniels

If you were to say to me “so, read any good books lately?” the answer would be a definite “no”

But who wants to read a good book when you have Under No Illusion, the life story of magician Paul Daniels, at your disposal?

It is better than good. It is bad. So bad it is bad and therefore good. But mostly bad. Very bad.

We start with his dramatic entrance: 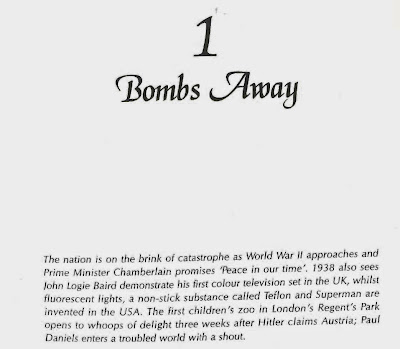 We experience the cold, budgie-killing reality of war:

Something that really gets up his nose by the way, bloody war:

The Holocaust didn’t bother him that much though, until he saw a film:

Not as traumatic as he finds homosexuals though: 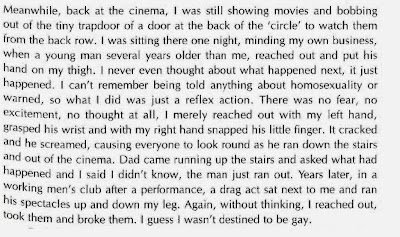 Thankfully nobody has ever thought he was gay, no sir: 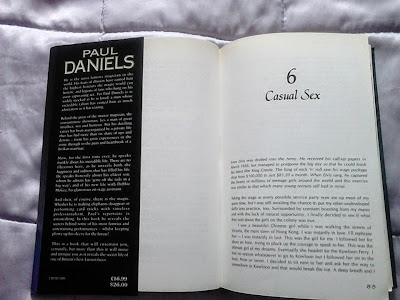 And rages with lust:

As well as his treatment of prostitutes:

And his description of their lady bits:

Oh and his attitude to women in comedy:

And the fact he thinks they are all filthy: 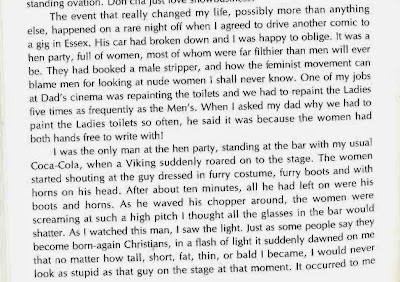 Oh and by the way, as a grown man, he bites toddlers:

He has an interesting name for his penis:

Has an even more interesting take on racism: 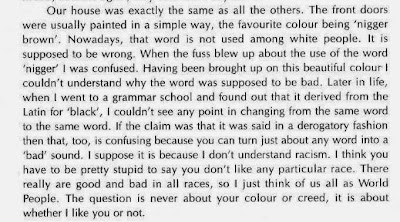 Has a yet even more interesting take on the teachings of Gandhi:

He once got covered in poo from a faulty boat toilet. One for the memoirs:

He abused his position in local government to spy on his first wife’s lover:

And then presented the lover and wife with a dossier whilst they were in bed:

But things turned around when he met Debbie McGee and they had sex in a rowing boat:

And finally, his most valuable life lesson. Take note:

I never knew he had it in him!

I was feeling pretty miserable today. I happened upon this blog and it has transformed my day. This book has everything, sexual encounters,the n word,shit covered magicians,dead birds...the list goes on. I would never have known this if you hadn't bravely read the piece of crap and for that I am eternally grateful... Thank you for making my coffee come out of my nose..:)

Glad to be of service!

it reads like the ravings of a street drunk,but without the wit or tact.

Mark - Using the great man's catchphrase against him. Don't fuck with the sorcerer!

BLaCKouT - Yes. And certainly not outstanding in a good way. Just literally, insofar as it just stands out. Juts out. Thrusts forward into your face, assaulting your senses. Horrifically.

Darren - Street drunks won't be very happy with that comparison ;)

And thanks Basil old boy.

And now I must live my life with Paul Daniels, Barbarian Defender of Heterosexuality, stomping tinily through my brain.

Thank for unleashing him from his unreadable prison.

Luke - My sincere apologies to your brain

This is my favourite thing. Thank you!

An absolute gem of a blog post. Snorting away, especially when you try and read it in the little odd man's accent. Many thanks!

Cheers anon. I do wish there was an audio book of it..

I can't believe I wasted time reading Alan Partridge's book when I could have just read this instead...

Go straight to the source :)

He has nothing to say about that picture of Debbie Mcgee?

This is a poor and unintelligent tilt at someone who's become a bit of a target for amateur sneerers. I've seen far more sexist and homophobic ramblings from comedians and musicians who you might expect to be labelled as 'alternative'. You won't post this comment but you need to have a look at yourself and your ability (or lack thereof) to empathise with other human beings.

Thanks for reading this, so that we dont have to

Anonymous - You have either dramatically cheered up or are another person ;)
Yes, it's extraordinary isn't it? Steve Coogan should have had him on the writing team.

why was he looking for the ugliest whore in China Martina?

And that was brilliant btw. Thanks.

I shall read it when there is an opportunity. I like the guy and rate him as a magician, in the David Niven class.but seriously a good entertainer in his day and well the equal of Mr Nixon. Love his approach to authorship

Anonymous - He was going to prank a drunk friend by putting her in bed with him whilst he was asleep and convincing him, upon waking, that he'd had sex with her and now had knob rot. The cheeky prankster.

Colin - Do. It will enrich your life. I wish more people would write their autobiography in his style. I have struggled to find anything to rival it.

Anonymous - He was going to prank a drunk friend by putting her in bed with him whilst he was asleep and convincing him, upon waking, that he'd had sex with her and now had knob rot. The cheeky prankster.

Colin - Do. It will enrich your life. I wish more people would write their autobiography in his style. I have struggled to find anything to rival it.

This is my favourite blog this week. I feel I have achieved something, by avoiding these memoirs. Thank you Christina for your fine public service.

Yeah, you have me bang to rights there.

If a woman snapped someone's finger or broke someone's glasses for touching her leg, I would don a cheerleader outfit and high five her.

I am literally laughing my face off at this! brilliant :)

Sorry to dislodge your face!
:)

Christina Martin
Former stand-up (comedycv.co.uk/christinamartin) one of Richard Herring's funniest things (https://www.theguardian.com/stage/2017/feb/03/richard-herring-funniest-things) and sometime writer. These days I arrange funerals for people who don't have family or enough money.

In the past I've written for the BBC, Viz Comic, New Humanist, (newhumanist.org.uk/1413) and the Guardian (guardian.co.uk/profile/christina-martin) I recently submitted my first book manuscript.

I like curating silly / pointless things, so have a handful of Tumblrs:

My brother is learning disabled and is supported to live semi independently by www.c-o-t.org.uk They have a wish list if you are feeling kind